The self supporting bridge 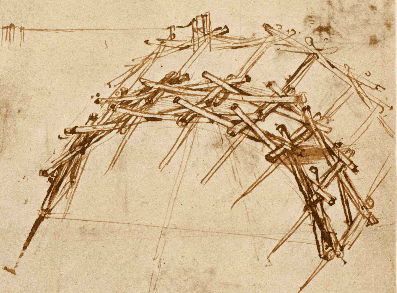 Leonardo self supporting bridge was designed while he was under the patronage of Cesare Borgia. Borgia employed Leonardo as his military engineer, in turn, Leonardo would design and build magnificent machines of war. One such machine was Leonardo da Vinci bridge. Its simplicity and genius cannot be underestimated.

Leonardo himself called it the “Bridge of Safety,” and Leonardo da Vinci bridge was just one of the ingenious bridges he designed throughout his life. He also invented several other products, including a revolving bridge that, according to Leonardo da Vinci, “could be quickly packed and transported to enable fleeing armies to cross waters,” “cross streams or moats, and on.” put the bridge on the other side for easy passage of soldiers” and “fitted with a system of ropes and pulleys for quick deployment and easy transport”. All useful tools for those who once aspired to military supremacy in Italy, But more useful for 21st century renaissance boys and girls.

Why was the self supporting bridge needed – it requires no specific skills to manufacture the parts, apart from a few men that are handy with an axe, Leonardo da Vinci bridge can also be carried by a handful of men into any battlefield. It requires no nails or ropes to hold it together – the bridge is self-supporting and would be capable of holding a substantial amount of weight.